Perfectionism is a dangerous state of mind in an imperfect world. The best way is to forget doubts and set about the task at hand…if you are doing your best, you will not have time to worry about failure.” 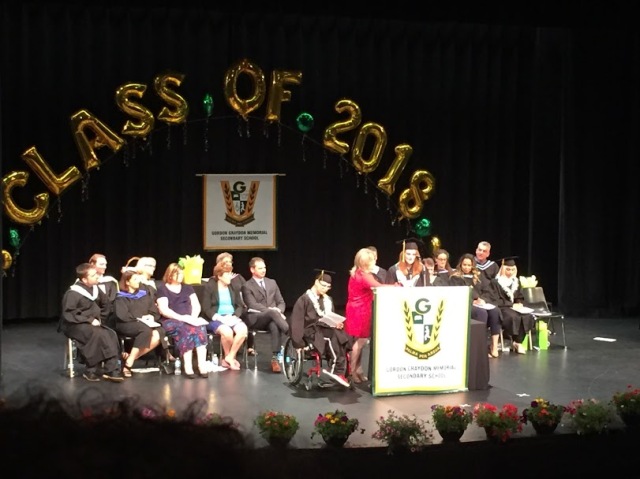 On the morning of the last day of school of my younger son Sahil, I went with him to Gordon Graydon memorial school to collect his last report card. We drove past Cawthra road to Ogden Avenue and memories of the first time he had taken me to this school four years ago, came alive. The accepting spirit of the staff here came alive in many ways over the years, as they guided my son through the high school grades.

“I see a future college university level student in him,” his French teacher in Grade 9-  Mr. Spanier had told me encouragingly as I had attended the first Parent Teacher meeting session in Gordon Graydon in 2014, a bit worried how he will transition from Camilla to Gordon Graydon.

“ He is a bit quiet but does his work. In building a life and room for ourselves in this society, new immigrants sometimes are not able to cope up with some aspects of parenting. This is internalized in many different ways by students-who themselves are transitioning through society, life, adolescence. This may lead to some children becoming very quiet.” Ms.Anton, the Physics teacher told us in the last Parent Teacher meeting we had, summarizing many currents.

It was an emotional Graduation ceremony, as the class of 2018 will be the last graduating class of this school as the school closes its doors after 61 years of service to the community. Speakers with long-term relations addressed their relation to the school and its legacy, the tradition of education.

The story of the moth, needing time to grow out of the cocoon, was told very movingly. This has many lessons for all of us, in whatever stage of life we may be in

The above-quoted words of Robert Hillyer-on perfectionism in an imperfect world, matched the story of the moth and the cocoon, with struggle being the basis of growth, freedom, and flight

As we finished the ceremonies and the refreshments, we started walking back towards the car. Then Sahil gave us another nice memory and lesson of the day, as we parents in our haste to get on with our other commitments were told- I want to stay a few moments more.

Sahil stood quietly on the lawns of Cawthra school, where this final graduation ceremony of Gordon Graydon was held. He did not mingle with the crowd, but just stood on the side and watched the energy and enthusiasm of the students and staff. I do not know what exactly went through this young man’s mind, as he is on the threshold of a new chapter in his life.

But as a parent, I saw the movie of his school days come across me, in a few magical moments. I remembered the times he told of his school trips to Stratford, in 2016, on the 400th birth anniversary of Shakespeare. Or the times when he would go for live-Ins in St.Edward’s college-Malta. Or the times when he won the three-legged race in Pinnacle High –Malad-Mumbai (see blog- 2009-March- A three-legged race https://prashantbhatt.com/2009/03/02/three-legged-race/). He started his educational journey in play school in L’avenir –The Future- a school run by the Gnostic center, Delhi. As I thought of the different teachers and institutions who in their many creative dedicated ways shaped the identity of Sahil, a feeling of gratitude came across.

AFTERTHOUGHTS IN ARCH OF MARCUS AURELIUS-TRIPOLI-2009-MAY

In your actions, don’t procrastinate
In your conversations, don’t confuse.
In your thoughts, don’t wander.
In your soul, don’t be passive or aggressive.
In your life, don’t be all about business
Marcus Aurelius, Stoic Philosopher

The Stoics counseled that perfection and contentment could be reached through reason, simple living, indifference to pain and death, and social equality.

To the Stoics, a wise man was one who played the cards that were dealt him, uncomplainingly and with dignity, whether a slave or a king

Keeping reading journals and using literature as a framework has been a quest over the years.

2 Responses to A few moments more