How I reached here…musings in a Libyan camp

“How I reached here, is a very long story, starting from my birth.

As you neither have the time nor the inclination to listen  or understand,

to impose your views on my context and situation.”

Words of one of those who stayed behind in Tripoli

during the conflict while being pressed to run away

to understand the views and experiences of one person: the interviewee.

As the situation in Tripoli is a bit better, we ventured out to a camp a little distance away from the main city. “Will my body be disposed off in a mass grave” he admitted having wept for some time, thinking of his impending death as the fighting in Aboslim area became very intense. The vocabulary is now having the gauge of the shells that fell.18,24..and so on and so forth.

“I decided to ask a fellow worker from Pakistan as I know that though he is a technician and I am a doctor, he is much more clever than me in worldly matters. When he advised me not to leave the premises, I decided to stay put.” In hindsight, that decision to take this advice probably saved his life, as in the most intense stages of the fighting around 21st, 22nd,23rd August anyone passing the bridge near Aboslim and Khadra hospitals was being shot and there are many posters now surfacing in Tripoli with faces of missing persons.

Why I did not run:

After some extended discussions, we decided to go to the camp, around 30 kilometers outside Tripoli to do the “Khoj-Khabar”..”Search-News” of some Indians whom we knew were staying in the camp at Suaani area, having been promised double salary for the period they took this risk.

“When the fighting came near, the two Libyan guards whom we had employed made their escape. When the opposition fighters came into our camp, the loyalists did not put up any resistance but just ran away, after discarding their uniforms.They always wore civilian clothes below their uniforms, ready for this eventuality.” This was the observation of three of the camp residents, one from Nepal, another from Midnapore district of West Bengal and the third from Fatehpur Sikri Agra region.

“I had the option of going and staying with my uncle when the fighting came closer. As our camp is very close to a bridge, we knew that there are going to be some clashes here. But I decided to stay on with my fellow-workers as I had decided way back in February that I would face whatever was the fate of my fellow-workers, come what may.”

There was intense firing for a few hours, mainly by the opposition soldiers who were ransacking the camp. No real fighting took place as the thirty odd loyalists just melted away into the countryside. Probably they were not very motivated from the beginning and were just staying in the camp as they were given orders to do so and could not disobey.

I did not run away leaving my fellow-workers, the young man from Fatehpur Sikri said with a degree of pride and confidence at having crossed an important personal landmark 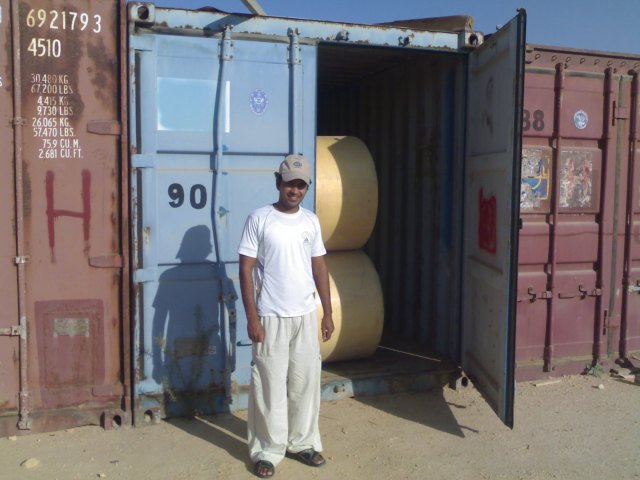 We hid in this container for a few hours. Their main aim was to take our computers and televisions and vehicles. They did not search to kill anyone. In the end it was not as bad as we had feared. We all escaped unharmed and undetected in this container.

A story of Duryodhana: I am not afraid of dying

As we drove back, my friend told me the story from Mahabharata whereby when Duryodhana repeatedly kept asserting-I am not afraid of death, Krishna told him- “Who is not afraid of death, that we will come to know only when faced with death and not by these untimely assertions.”

I thought about this young man, in his early twenties, not having had the many joys and enriching experiences of life, but willing to take a stand, and not desert his relatively senior fellow-workers, who had seen much more of life, and experienced many of it’s joys and disappointments.

As we drove back to my house in Ben Ashor and watched the sun set, (having sipped coffee on the back terrace after a long time-as in past months it was not safe to be out in the open for long) we went back on the day’s events.

“Who are we to say anything about these people?” my friend said. “It is they who have suffered most at the hands of the regime. The international contract workers were not touched by the regime. It is this society which is now seeing Tifna-Conflict and disruption. Now the internal conflict is coming out in the open.This was going on for decades in a different form earlier.”

As one of my colleagues rushed to donate his rare O-negative blood to a hospital in Tajora (a lot of casualties are coming from Bani Walid) and another told of the risks in the Zuaara area, I remembered the words of an old-Fox…

”The Berbers are not originally Arabs, and they have maintained their identity, language and customs but adopted some Muslim practices due to fear of the regime.” Another interesting line of enquiry for the future.

A doctor in Imaging, photographer, writer likes to read and travel. A regular diarist, journaling since 1983 Reading journal : gracereadings.com
View all posts by prashant bhatt →
This entry was posted in life, Walks and tagged Immigrants, Libya, Tripoli, Tripoli Reading Group. Bookmark the permalink.