A letter to a loved one who has passed away

A LETTER TO A LOVED ONE WHO HAS PASSED AWAY

The legendary basketball coach John Wooden writes in his book “Coach Wooden’s Pyramid of Success” about the concept of writing a letter to a loved one who has passed away. He would write a letter to his wife, and then file it away every month. Over time, this led to an interesting collection and rhythm. 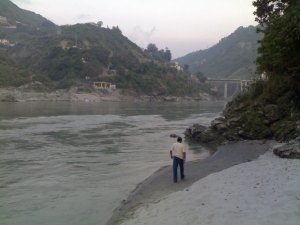 Walks by Alaknanda-Garhwal Himalayas-India.Near the bridge connecting
Srinagar and Kirtinagar. The priest in the Bilu-Kedar temple nearby knows our family for generations. A nice place to write a
letter to a loved one who has passed away.

In the previous entries, I have written about the letters, notes which helped shape my habit of keeping diaries, journals, and using them to facilitate Reading groups. My grandfather-a political science teacher- was the first person who would write letters to me from Moscow in the seventies, correct them and return with suggestions. When he returned to Pune in 1979, we would go for morning walks together. The introduction to the magic hour when night turns into day, is a gift given to me by my father. Writing letters to them now, when they have passed away for many years, made me examine the debates between Freud and Jung and look closer at the works of playwrights such as Trevor Griffiths.

TO MY FATHER-A MEDICAL DIARY

The work diary and pharmacokinetics notes of major drugs which you used to keep and revise regularly continue to shape my work. In remembering the numerous institutions to which you were exposed in your career as a military doctor, I start with the time when we went to Christian Medical College Vellore in 1973 to specialize in Cardiac Anesthesia. In that exposure to concept of super-specialization, I realized the need to be an expert in one body of knowledge as knowledge is ever expanding and one cannot know everything.

Applying this concept to the field of medical radiology, for the past several months, I have streamlined the running of a department using the Operating systems of Magnetic Resonance Imaging. In Radiology drugs are not used as often as in Anesthesia. Ours is the field of Differential Diagnosis. Hence I have kept a monitoring chart of universal differential diagnosis and keep a regular log of the number of cases which fall into each category. This has helped me bring into sharp focus, the types of referrals, the referring doctors, their preferences and helps to quickly streamline the many Imaging protocols involved.

TO MY GRANDFATHER- A SOCIAL SCIENTIST

The habit of the library and reference which I saw you follow even in the post-retirement years has helped. In the years post-2011 war years of Libya, I have consciously kept a larger digital library as if one has to move out of an area quickly, one cannot carry many physical books.

You must not be aware of this concept of Digital Library as this was not present at the time of your physical life. Nowadays, one can access many great works of literature with the click of a button. There is a device known as “Kindle” in which one can carry thousands of books. After the war in Libya in 2011, I have made this a conscious effort.

Interestingly, many of the great classic works like those of Aristotle, Plato, Marx, John Stuart Mills are available for free downloads. Some others like Tolstoy, Dostoyevsky, James Joyce, Virginia Woolf are available for less than 3 dollars. You would have really enjoyed this device very much. Apart from Kindle device, one can even install this system on any computer and carry your library anywhere with you.

The writer Trevor Griffiths writes about his development as follows

“I did not invent myself, the world invented me.”

As I followed the concept of Coach Wooden of writing an imaginary letter to a loved one who has passed away, I thought what I would write to my father- a medical doctor and my grandfather- a social scientist. Both of them loved knowledge and the written word in their own ways, but were from very different worlds. Through their examples, their work-ethic and explorations into specialized fields of knowledge, they inculcated a love for the written word in me.

This made me re-examine the debate between two great schools of psychology. Jung’s primary disagreement with Freud stemmed from their differing concepts of the unconscious. Jung saw Freud’s theory of the unconscious as incomplete and unnecessarily negative. According to Jung (though not according to Freud) Freud conceived the conscious solely as a repository of repressed emotions and desires. Jung agreed with Freud’s model of the unconscious , what Jung called “the personal unconscious” but he also proposed the existence of a second , far deeper form of the unconscious underlying the personal one. This was the collective unconscious, where the archetype themselves resided, represented in mythology by a lake, or body of water, and in some cases a jug or other container.

This concept of Jung can be applied to the words of the playwright Trevor Griffiths-I did not invent myself, the world invented me. He goes on to tell how he came out of teaching, the campaigns for nuclear disarmament, and the New Left circles. Griffiths tells about the active back history pushing him forward. When he got to confronting producers and production units and the BBC and all that stuff, he didn’t feel that he was on his own,

“I felt shoulder to shoulder with a hell of a lot of people.”

In the first blush of youth, in the urge to carve one’s own identity, the younger new generation keeps trying to challenge the works-concepts of their previous guiding generations. As I look back to the walks-discussions I had with my father and grandfather and now write to them imaginary letters after many decades, there are many moments to pause and smile at one’s foolishness. Or shall we say, this is what youth is. This is the concept written about by the writer James Baldwin in his great essays- Notes of a Native Son (written on the passing of his biological father) and “Alas Poor Richard” (written on the passing away of his spiritual father). Baldwin wrote about seeking answers from his father, and finding empty bottles in which answers will be filled in by experiences of life, now that his father is no more there to stand by him. Following the concept of Coach John Wooden of writing letters to a loved one who has passed away is an interesting way to bring one back into the mode of their thinking. This is what probably Jung meant by his concept of collective unconscious or what the writer Trevor Griffiths seeks to explain when he remembers his New Left circles and says-

“I did not invent myself, the world invented me.”