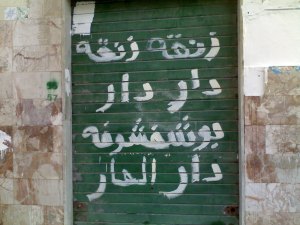 One person with belief is equal to 99 with interest.

What are the public health issues in Libya today? In a population with many war-wounded and suffering families coping up, this formed backdrop of our discussions this week.

The 2013 Richard Dimbleby lecture by Bill Gates gave many useful insights into the nature of public health. As specialist medical practitioners , a fragmented myopic view can develop and one can get caught by different market forces. Lingo such as “ turn around time” and “financial balance sheets” can cloud one’s vision of seeing the human being behind the “patient”, the family behind the “client”.

The discussions and readings which followed made us look at the Libyan context of Health on the occasion of the second anniversary of the February 17 revolution.

The introductory segment of the lecture told about Richard Dimbleby’s contribution in exposing the famine in Ethiopia.The brutal famine that Emperor Haile Selassie had been concealing from the outside world was exposed by the documentary, The Unknown Famine. It did what great journalism is supposed to do: shine a light on the dark corners where human misery is hiding

Bill Gates talked about his journey and education in public health in the lecture.

When Melinda and I created our foundation, we didn’t know very much about global health. We required an education. As luck would have it, one of the giants of the field—one of the men most responsible for eradicating smallpox—happened to live in Seattle, and he offered to help.

His name is Bill Foege, and he is not only a brilliant epidemiologist; he is a man of great morality. His father was a Lutheran minister. When Bill was choosing a career, he couldn’t decide between public health and preaching. His ministerial instincts still come out when he speaks about his health work. He’s one of the most articulate and inspiring leaders in a field where matters of life and death tend to be mummified by jargon and statistics.

I used to read his speeches to remind me who global health is for.

Here is a passage from Bill’s recent book, House on Fire: “In early October 1977, a couple with two small children, both with smallpox, approached the hospital in Merka, Somalia. They asked Ali Maalin, an employee, for directions to the infectious disease ward. A considerate person, he took them to the ward rather than directing them. Although he had been vaccinated, it was evidently not an effective take. Two weeks later, on October 26, 1977, he developed the last smallpox rash that Africa would ever see….” In 1978, smallpox was declared the first disease to be fully eradicated.
Bill Foege has the unique ability to see the forest and the trees, to celebrate the common decency of a man who refused to shun the sick and appreciate the historic majesty of completely eradicating a disease. He continues, quote:

By 1978, public health achieved its first complete success in social justice…for current humanity and for all future generations.”

Chronic pain, infections are mentioned as two areas of concern in the recently published Libyan Journal of Health. The war injured are both a source and victim of infections.Cross Border care is another issue of concern in this population which routinely goes to Tunisia, (Go-To-Tunis Syndrome) and other Arab and European countries.
Internationally, public health structure is comfortable with chronic diseases, injuries, violence, micronutrients of all kinds, and even issues of war, human rights, and poverty.

GUNS AS A PUBLIC HEALTH ISSUE
HAVING A GUN INCREASES CHANCES OF BEING SHOT!!

In the Libyan population there are many armed people. Security is a big issue. Friends from some European countries have evacuated. In a recent journal article of APHA they found that gun possession by urban adults was associated with a significantly increased risk of being shot in an assault. On average, guns did not seem to protect those who possessed them from being shot in an assault. Although successful defensive gun uses can and do occur, the findings of this study do not support the perception that such successes are likely.
A few plausible mechanisms can be posited by which possession of a gun increases an individual’s risk of gun assault. A gun may falsely empower its possessor to overreact, instigating and losing otherwise tractable conflicts with similarly armed persons. Along the same lines, individuals who are in possession of a gun may increase their risk of gun assault by entering dangerous environments that they would have normally avoided. Alternatively, an individual may bring a gun to an otherwise gun-free conflict only to have that gun wrested away and turned on them.
Read More: http://ajph.aphapublications.org/doi/full/10.2105/AJPH.2008.143099?prevSearch=&searchHistoryKey=

In private sector context in Radiology department, Libyan British Medical Centre we do all follow-up ultrasound scanning of chronic diseases free of charge. Over the years we have a steady flow of patients from Oncology, Infectious diseases Unit, Endocrinology, Chronic renal disease, peripheral vascular diseases, breast imaging. These are patients who require regular follow-up, find themselves facing endless delays and misguided diagnosis in public hospitals. Once they have their charts with us, they can follow-up very quickly and accurately.
Maybe this is a small step, but we do have some regular patients with whom we have formed interesting partnerships. There have been some interesting follow-ups from leading departments in the University and major teaching hospitals.

While issues such as security, different tribal and regional factions and their cohorts take up time and attention the question can be that of shared goal.

There are many roads to the goal, but I think a good starting point is the belief that we can improve, can do better. As the second anniversary of the February 17 revolution comes we can pledge to build on the words of John Stuart Mill

One person with belief is equal to 99 with interest.

Touch and Go-Evacuations in Tripoli

Notes from a Libyan Camp.

2012- The communities are slowly re-organizing

One Year on-what is the change