No decent man ought to let his wife visit a deceased wife’s sister. Incredible!

Write in the voice of your favorite writer.

Jeff Goins cue made me think of the many possibilities, from Ruskin Bond-India’s Wordsworth in Prose, to James Joyce-the intimacies of Leopold Bloom, or Amitav Ghosh-the voice of the sea-farers.

I settled to try and write in the voice of “Mrs. Dalloway”.

Only I imagined her to be a Tripoli lady, 52 years of age, having studied in a University in Malta in her younger years, and now the bored wife of a rich businessman whose many personal and professional affairs she tolerates, for the sake of her social position and mask and her children.

Laughing and delightful, she had crossed Shara Omar Mokhtar when he caught her eye.

Later she texted him not to recognize or approach her in public.

“In our society, this type of relation is not possible.”

She liked him and the many opportunities such a relationship would bring to her.

“I know why Sulaiman helped Hemal to get the farmhouse in Tajoura last summer,” Reem thought to herself.

Her silence did not mean that she did not know.

“Will you come to Sabratha with me this spring” Khaled had asked her as they walked through the garden of their office complex.

” No! That is not possible for me, till my children grow up.”

Reem walked past the stationery shop on Shara Omar Mokhtar.

This was where she used to once buy crayons for her daughter, when she had entered nursery. Next year she would be graduating from architecture school. She had to hurry with the fresh onions and potatoes, or she would be late in preparing the salad. Sulaiman’s friends from Germany liked the way she prepared salad, something she had picked up from their years as students in Frankfurt. The salad , the hopes which life had held out to her. Now she lived from semester to semester of her children. Next year, her daughter would graduate. But she still had three other school going children to care for. No time to walk in Sabratha, especially with foreigners who are buccaneers of sorts.

Jeff Goins challenge to try and write in the style of one of your favorite writers made me set an imaginary Clarissa Dalloway in 21st century Tripoli .

Mrs Dalloway was first published in 1925 and concerns a day in the life of Clarissa Dalloway in post-World War I England. It is one of Woolf’s best-known novels. Created from two short stories, “Mrs Dalloway in Bond Street” and the unfinished “The Prime Minister”, the novel’s story is of Clarissa’s preparations for a party of which she is to be hostess.
With the interior perspective of the novel, the story travels forwards and back in time and in and out of the characters’ minds to construct an image of Clarissa’s life and of the inter-war social structure.

For those unfamiliar with the work, Clarissa meets her one time lover Peter Walsh after 30 years, at 11 am on the day she is preparing for a party. Her husband Mr.Richard Dalloway is lunching with a Lady, who has not invited her with her husband. Meeting Peter, just back from India, makes her think of the many possibilities which life would have had if she had married him.

If such a character would exist in Tripoli of 21st century, she would probably meet a Peter Walsh much later in life. The social structures would have made her marry young to a wealthy businessman who treated her like an instrument he owned. Only much later in life, meeting an expatriate worker from another society did she find a model to compare her situation with. However, she keeps silent about her longings and also the many indiscretions of her husband for the sake of her children.

Is her life over?

A 52 year old “Clarissa” in Tripoli’s post-revolutionary society would still find many social structures still the same as in the times of the previous regime. The collapse of the state machinery makes the less well-to-do and compromised sections of society-students, dependent children and wives even more vulnerable, as the rich and powerful have no checks and balances which were available earlier.

She would probably use her daughter who is studying in final year of architecture college as her alter-ego and encourage her to liaison with a foreigner. Her husband would resist such an attempt and would want to marry off his daughter in known family circles.

The writer Stephen King in his book-On Writing- tells how he modeled some characters on the basis of school girls he knew. He also tells of trying to write 1000 words a day, the importance of the first draft and the re-writing and editing processes. These are similar to what Jeff Goins has said. However, his public challenge of 500 words a day has been a creative way to get us out of our shells.

The two major Master Plots presented in “Mrs.Dalloway” are

1.Hero goes on a journey

Both themes can be seen in the journey of Peter Walsh, he has been on a journey to India and through many relations, and he comes home to Clarissa Dalloway after thirty years of their first love. The question of how life would have turned out if they had married each other comes forward and both characters answer it in their own ways. The rich inner dialogue , stream of consciousness techniques are seen. Both characters are from the same country and Christian background.

In 21st century, with increased mobility, there is more chance of people of different backgrounds, countries, civilizations meeting each other. This can make the richness and complexity even more interesting and building on the two major master plot themes can be a great journey of discovery.

Reem said a polite hello to Huda, the sister of her husband Sulaiman ‘s first wife. There was no avoiding her as they were in the stationery shop in the morning, there were no other customers and Reem could not pretend she had not noticed Huda. Reem had thought she will prepare for the party, and make a quick round of Shara Omar Mokhtar to do some shopping. Huda reminded her of the will her husband Sulaiman had made last summer. Most of his assets would go to the children from his first marriage.

“What about my children,” she had asked Sulaiman after a lot of internal debate of whether to bring up this topic or not.

“I have spent a good quarter century with you, taken care of so many things. Where were the children from your first marriage when you were sick in hospital two years ago,” she had screeched, unable to control herself.

Sulaiman would not discuss this topic with her. Reem had not wanted to think about this but the chance meeting with Huda in the stationery shop had set about a chain of disturbing thoughts.

Reem had to try and see things through her husband Sulaiman’s eyes-one of the tragedies of married life.

Over the past three years, he had become more and more secretive, involved in the affairs of the changes going on after the change in power.

“The rules and regulations, the officials are still the same. But there is a difference. But you will not understand these things,” Sulaiman had brushed her aside when she tried to know the inner dealings going on.

She reached for her cell and texted her friend who she liked but could not meet or recognize openly.

” Maybe you can come to the party I am hosting tonight.” 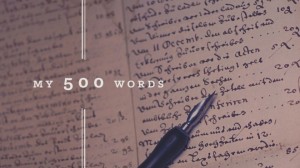 Part of the 500 words a day challenge by writer blogger-Jeff Goins.
http://goinswriter.com/my500words/
For a regular diarist the interesting thing will be being selective

A psychologist, interested in mindfulness practices. I practiced medicine as a radiologist for 23 years in India and Libya as a radiologist before shifting to Canada. A regular diarist, journaling since 1983 Reading journal : gracereadings.com
View all posts by prashant bhatt →
This entry was posted in life and tagged 500 words a day, Diary, Indian Diaspora, Libya, Tripoli Reading Group. Bookmark the permalink.

1 Response to Is her life over?-Scenario 1