Posted on September 3, 2012 by prashant bhatt

On the occasion of 50th year of Jamaican independence, we saw an interesting exhibition and attended a meeting of artists and diaspora , mainly from Jamaica, which lead to discussions on the aspirations and impressions of the present generation as they looked back on the past half a century.

“They were a very talented generation, who gave a lot to their people. And none of them died rich” one veteran summed up the struggles and spirit of sacrifice of the generation who fought for Jamaican Independence to a generation of mostly Canadian Jamaicans who probably did not have much first-hand knowledge of the struggles or their home country, having stayed in Canada for long.

“While the nationalist school had already consecrated aspects of the popular culture as the definite core of Jamaican culture, they had treated this popular culture as subject rather than as a source of ‘legitimate’ art in its own right. This, too, changed in the 1960s, when popular cultural expressions became more publicly assertive and gained national visibility and recognition. 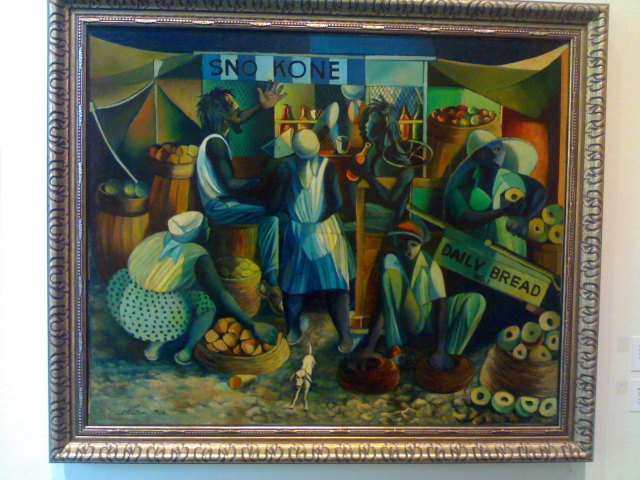 It is in this context that self taught, popular artists such as Mallica “Kapo” Reynolds, a Zion Revivalist leader and Everald Brown, an exponent of religious Rastafari, came to the fore and in both instances, their work was directly related to their religious beliefs and practices

By the 1970s , when the new political radicalism gained more mainstream support, Rastafari had been recognized as a defining aspect of contemporary Jamaican culture, most notably in the field of music, but also in the visual arts and culture, and it remains as a central part of Jamaica’s visual identity to the present day.”

The exhibition and discussion reminded me of discussion which I once had with the Maltese guitarist Tony Pace on the Piedmont Blues guitar tradition which originated in West Africa and found its way to the Americas and the expressions of writers like James Baldwin, Zora Neale Hurston who wrote about the folklore of the working people of America. Traveling gives one exposure to these trends and I thought of another exhibition in Delhi’s National Gallery of Modern Art- In the seeds of Time where  evolution and impact of European realism on Indian art has been dealt with.

Remembering conversations with the Maltese guitarist and teacher Tony Pace

He acknowledged that Maben had taught him well.

..of the Cultural historians who connected the African-American context

picking techniques brought to America by slaves and the Piedmont style

that developed from them.

The meeting asked some interesting thought provoking questions and some younger artists came up with very interesting answers.

The organizer had asked the viewers to write about their impressions of any one piece of art.

“Is my opinion really valid as I do not have much first hand knowledge of Jamaica?” one sensitive young artist probed.

An interesting afternoon, summing up the post-colonial worlds quest for identity

1 Response to Rastafari-some conversations on identity