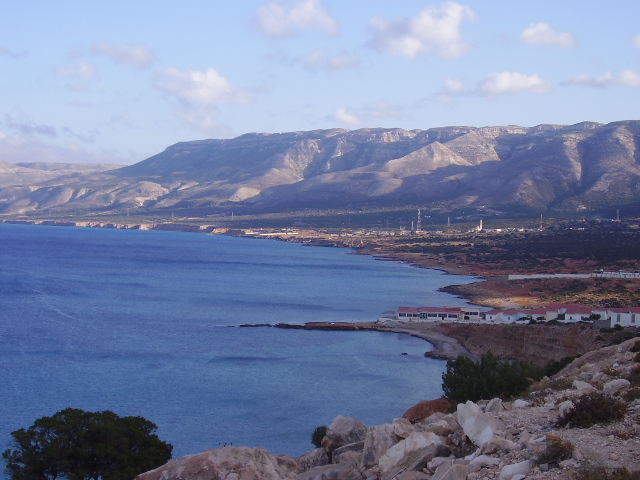 The area around Ras Al-Hillal, 20 km east of Susa, has some of the most dramatic scenery on a coastline I have ever seen.

For the full effect, Ras Al-Hillal is best approached from the west. Coming up over the rise, you are confronted with a beautiful arc of bay, with a backdrop of towering moutainds and a canyon-like valley running into the Jebel Akhdar (Green Mountains)

It was a marvelous morning, and I have rarely seen anything so beautiful as this mountainous country. Colour was everywhere, from the sky which formed a deep blue arch over my head, to the thousands of shades of green in the woods all around. The ground was thickly strewn with all kinds of flowers, and black and brownish-red butterflies fluttered amont the gaily coloured blooms. Here the rocks,e ven where they were bare, were not grey, but displayed a wealth of color.

Ras Al-Hillal was, for a time, the second port of Cyrene, after Apollonia, although nothing remains to suggest this.

But some friends have told that there are underwater remnants of this Greek times port.Maybe, some day, someone will do some underwater archeology and rediscover them.