Tripoli to Malta-Some walks and conversations

The airport check in at Tripoli took longer than the actual time of the flight. Some Libyans who were carrying food to Malta to feed the fasting tried to send some baggage with me. The check-in security person would have nothing of it.

“He is an Ajnabi-Foreigner. He will have to pay for the extra baggage” the security person explained to the Arabs.

1.9.08: Went for a long walk to Valletta. The Great Siege Bell monument, Lower

The history and culture of Valletta and the centuries old layers of history get inside you as you walk down Republic street. The St.John Cathedral. The monuments. The Café Cordina in front of the Bibliotheca, the beautiful sculptures of the Ta gunju monument.

Standing in front of the sculptures which I have seen previously too, and also in the photographs made me reflect on the past months gone by. Bought a bottle of nice chilled orange juice.Watched some game of brocci-A local Maltese game. 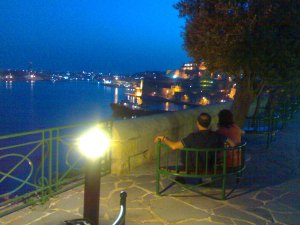 Met an old colleague who had worked in Libya and now is settled in St.Luke’s hospital, Malta. We talked about our life in Libya.

“It was our life doctor” she said, remembering the 12 years she spent in Tripoli.

The stories of life, the different layers.

Earlier in the day, one Maltese friend was telling that the worst nightmare of this life would be to wake up in an Arab country finding women dressed in hijab!

I told him to try and examine the mind sets and origins of these types of thinking whether it is the sexual-objectification of women in west or their enslavement in the repressive societies. 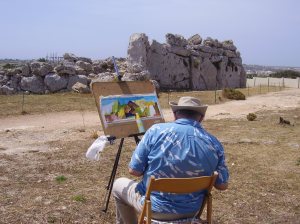 A quick trip to Valletta in the morning, saw the Palace Armory and took some nice photographs, and then a brief visit to Hastings garden. It was nice to walk the old paths again. Very interesting to see the different possibilities reveal themselves.

Went to Mdina in the next morning.Started early, and reached Upper Barrakka after taking some nice photographs of the Freedom monument and St.Publius church.

The audiovisual guide tours of the Palace Armory and Mdina both were detailed and she how the different aspects of Maltese life evolved over the centuries, the warring groups of the Mediterranean region. The life of the people, the conflicts with the Turks. 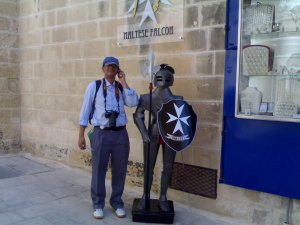 “I do not go to church on Sundays. I would rather go out to the sea. But I am a Christian at heart and have sound values, will not cheat anyone.” A Maltese friend who loves and lives by the Mediterranean.

“I make a list and shop, work on a budget and try save one salary. Earlier, in Libya, all my salary was going in the education of my son. We have everything. Only we have to be a bit careful.” she told of life and economy of household in Malta.

When my son was 13, he told me one day, Mummy, this is enough. I want to leave Libya. He stayed in Libya for 5 years. For a year, he stayed with a Maltese family, a single mother with four children,” she told of how it was her son who first came to Malta.

After a year, her husband left Libya and found a job in Malta.

When my children were 15, I wanted to make them street smart. If someone gives them a drug or cheats them, they should know how to get about it.Otherwise, you become a loony,” a Maltese friend told of his experiences and approach to parenting.

“So I used to leave them at Bay street and picked them later. They came to know what is right and wrong, made their choices, and both of them do not smoke, and have done well for themselves,” he said.

The children who went to Bay street when they were 18 were in a different mind frame. So one has to see how things work out if you give proper exposure to people.

“The last one year was very depressing. From Tripoli I went to Bulgaria. My father is 73, has Parkinson’s and was very stiff, till we took him to a specialist who has changed some treatment and now he has a new life,” she said.

“The job switch was another painful process. From 19 years of age, I never was unemployed. The months I spent without a job, were very taxing,” she told. “I would go for a walk for three hours around Buggibba area.”

They tell me-Do not become like the others. The compliment coming from the patients, who can feel how I care for them from my heart is better than coming from administrators.

This is not only my profession, it is a way of life.

She told of how some of the patients had loss of memory. Some ring up their mothers to tell them that they are taking pills. Sometimes comic, sometimes tragic, this is life as more people live to an older age and issues of adult care, memory loss come to mind.

“No one really knows why it happens. It is not as if those who had a very active mental life are spared of it. Take the examples of Ronald Reagan and Margaret Thatcher”

It wipes off not only your memory but your entire personality.

Back in the 1900s, Chevalier Anthony Cassar began a quest to craft the perfect bottle of Marsovin wine. Today we are proudly following in his footsteps producing wine with a professional and dedicated team constantly striving for excellence in our wine making techniques. Marsovin. 1919.

Had a chicken-mushroom pie sitting at Spinola Bay of St.Julian and then caught the bus to Valletta. It was a nice trip, first to Hastings garden where the preparations of the 80s night was going on. Took some nice videos and photographs, using both the SLR and the phone camera. Walked to Upper and Lower Barrakka gardens and then through Valletta, taking some nice photographs on Republic street and the façade of St.John Cathedral. On the way back, got down at Preluna and walked back through Sliema and St.Julian. The San Girgor feast and fireworks all gave a festive atmosphere, reminding me of Dusshera and Diwali of India. It was a nice trip lasting over 6 hours.

8.9.08:Went for a long walk with some running in the middle from Sweiqi to San Julian to Strand right up to Fort Manoel and back. It took over two hours, but was a memorable walk.Observed how other walkers and runners are getting the rhythm.For a start one can even do alternate walking and running. The movements of the arms, lifting of the legs. Some runners were really well tuned while others were doing it for reduction. 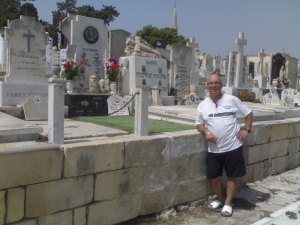 Last time I saw her at Sir Boffa hospital. This time it was at the cemetery. Mario and I drove from Sliema and went to the family grave. Many memories came back. It has been her love and encouragement which has made an enduring relationship and added perspective in life.

“It was a cold rainy night, and I was hungry.Do you have something to eat?”

That started an association which has gone back decades and generations.

A notebook and a glass of beer..regular companions in the lovely walks. 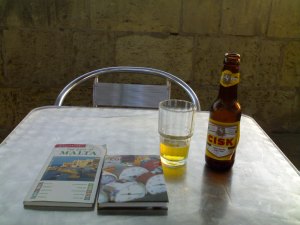 A psychologist, interested in mindfulness practices. I practiced medicine as a radiologist for 23 years in India and Libya as a radiologist before shifting to Canada. A regular diarist, journaling since 1983 Reading journal : gracereadings.com
View all posts by prashant bhatt →
This entry was posted in Art, life, Walks and tagged Malta, Mass Observation, Walks. Bookmark the permalink.

1 Response to Tripoli to Malta-Some walks and conversations