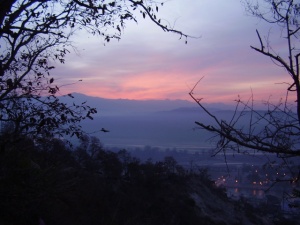 One Dr.Grant, a cardiologist had a house on top of a hill in Lullanagar. He would go for a run in the morning and evening with his dogs. He was most probably in his late fifties at that time. The sight of this man, huffing and puffing on the road, regularly, without break, even on the days it rained, was an inspiring sight. He was one of the first persons who inspired me to take up road running. I was 11 years old when I first took to the roads. Jogging on the roads of Pune cantonment. Going past Wanowrie and then coming up the Lullanagar hill,following the route taken by Dr. Grant. This man, whom I never knew personally has given me a gift that has stayed over the decades. The streets look very different in the early morning. No people crowding on the roads. No rush. No pollution. The feel of running on the middle of the road of the main shopping plaza of Pune- the M.G.Road in the early morning hour is great.

Thanks to Dr.Grant, I came to know what it is like in Sholapur Bazaar in the early morning. One of my jogging friends told me that there is a lady dressed in white, who stands there in the wee morning hours, with a child in her arms. One can hear the child crying. But when one comes close, there is nothing! I never saw that lady or the child. But my jogging friend has seen and heard them many times.

My grandfather came back from Russia in July 1979. He was another great morning walker. He would get up early in the morning and go for a morning walk to Lunanagar, dressed in a coat, a hat and a walking stick in hand. Dressing sense carried through the decades,by the retired Professor of Political science of Banaras Hindu University who did his PhD under Harold Laski in London School of Economics in the nineteen thirties. The walking stick has many layers of culture ingrained into it. Human beings carrying various layers.

SOME WALKS….(Click to enlarge image)

Dusk at Bharatpur..Tirtha da walking with his students after a tranquil day at Bharatpur-India

O little Child-Teach me to deal with persons more personally and less anonymously..Ramblings on a beach. Aksa Bombay-Oct 27,2008

He walked through the campus of Allahabad university in his college days. Or through pre-partition Lahore in the initial days of his career as a teacher. On the hills of Sagar University of Madhya Pradesh, where he founded the department with the first Vice-chancellor Hari Singh Gaur. His photograph and name are inscribed on the walls of that university department. A legacy of education. And a legacy of morning walks. With him I started having my first conversations in the mornings. Civics and life. The construction of society. And also came to know some first civilian friends of his, amongst the morning walkers.

One of them owns a sports-goods shop on MG Road. He never charged me anything for repairing my football. Walking in the early morning rain is a great feeling. ” You will fall on the slippery stones” some well-wishers told him. But he would not listen. And with him I walked up the hills in the rain. Over the slippery stones. But with that wet walk came the joys of the scent of wet mud in the early morning hour.

People put on many scents, and creams and after shave lotions. I even came across perfumes with exotic names on the ancient Egyptian Pharoahs in the bazaars of Cairo. Rameses and Nephretiti. But is there a perfume which can match the scent of wet mud after an early morning shower. I have not yet come across such a scent. These early morning rain-walks also introduced me to the joy of  looking at the clouds and the dance of the early morning sun rays piercing the clouds. Purple red skies on an early rainy morning. And the joys of a rainbow on a hill.

He had a poetic name. But some people called him “Gabroo”.He used to write poems on the recent happenings in the country. He would put them down in verse and recite. He would recite about the snowfalls in Lahaul which have cut them off from the rest of the country.Or the recent politics of the country or city. At around 12 years of age, I was first introduced to the live form of this expression of events in society, through poems and words, verses and rhymes,all composed beautifully by this sweet man, whom people called ” Gabroo”,

Through these walkers of Lullanagar, Pune, I came across the first club of my life. The morning hour on the hill first introduced me to people from different walks of life, with different orientations and backgrounds.The hill in the morning was our common ground. Cardiologists, teachers, poets, shop-keepers, children collecting stones. Hindus, atheists,professionals, Christians, Parsees, hockey-players,runners,dreamers…Students, priests, chanters of Om.

My father and I would go for morning walks in the hills of Lullanagar. And that wonderful gift of the morning hour, which my father gave me, lives on. Through these walks I have come across wonderful people and many lovely hours sitting on hill tops, becoming one with the universe.

8 Responses to Walkers at Lullanagar