The Cemetery at Mansoura-Tripoli
Many intimate links and memories

In better times, we have visited many cemeteries across Libya.

MEMORIES OF TIMES GONE BY

In better times, we have visited many cemeteries across Libya.

Albert Schweitzer said- “The Tombs of young men, are messengers for peace.” I saw this inscription at the gates of the German cemetery of Tobruk (where the elected House of Representatives now sit instead of the capital Tripoli, safely away by over a thousand kilometers!).

The Eastern part of Libya has had many links with Egypt for millennia.

One such walk- I came across a Byzantium time church in Eastern Libya.

The mosaics here are said to be around 1500 years old-there is a mosaic which depicts the ancient lighthouse of Alexandria, showing the intimate links of these regions, before the imperial carving of national boundaries in the 20th century.

On another walk through the Greek time city of Cyrene-Modern day Shahat in Eastern Libya- one feels the story of Simon of Cyrene more intimately. He helped Christ carry the cross to his crucifixion.

Are there any living Bettuchis around Tripoli region? 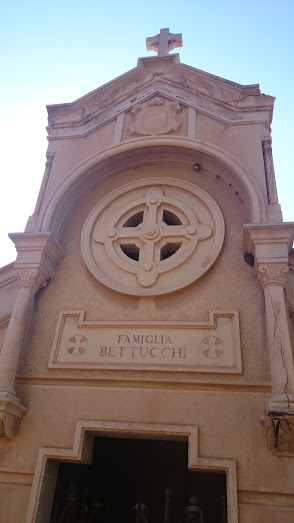 Are there any living Bettucchis in Tripoli Region..one of their descendants once    asked me..

An educator asked me about his family. They had lived in Tripoli region from the second half of the 19th century to the first half of the 20th century.

I could not find any living Bettucchis in or around Tripoli region.

Trying to follow their story made me familiar with this community of settlers who had lived and made Tripoli their home.

I did meet one Italian, born and brought up in Tripoli, who stayed on after the passing away of his parents-who were associated with the health sector.

The cemetery at Mansoura is where the parents of my friend Marino are buried. A walk through this beautiful place gives one a window into the world of communities who lived here in times gone by.

FAREWELLS AND SIGNIFICANCE OF CHURCH

Goodbyes are always difficult, but Daddy will live on in spirits

“It is difficult for me to say farewell to Daddy, whose pastor I have been for over ten years,” the Filipino priest said at the beginning of his prayers as the community gathered to pay their last respects to a veteran of the expatriate community originally from the Indian subcontinent.

As we went through the rituals, I reproduce a brief summary of a talk on the significance of Church-given in the Anglican Church of Medina-Tripoli by Reverend Vasihar.

The building which houses the Anglican church is a heritage building of Tripoli. It has a Maltese chapel and many interesting Murals.

Father Vasihar started his talk by telling about the differences in the Catholic, Lutheran, Presbyterian traditions.

Father Vasihar talked about the Protestant tradition in which they say that Jesus Christ is the cornerstone upon which we are built. He quoted St.Peter himself on this issue to prove his point.

In the Protestant tradition, Jesus is the cornerstone, all Apostles are equal and the church is the living stone-the embodiment of the teachings of Christ.

Father Vasihar stressed on the question which Jesus Christ asked- Who do you say that I am? He repeated this question three times, and gave the different answers given by different people according to their orientation. People have described Christ as a great historical figure, a great moral leader, a great teacher.  Peter has told that Christ is the Messiah, the son of God, our savior. Submitting to this belief in Christ is a central tenet of their faith.

Father repeated the main points of worship which he had told 2 weeks ago. To worship is to know, praise, enjoy and revere him.

Then Father Vasihar came upon a very important point regarding Church being the assembly of love and worship of God and also to love our neighbours as we love ourselves. He pointed out that many fall into the trap of worshiping God, but not extending their love to their neighbours. To have a living faith, one has to love our neighbours as one loves ourselves. Only then will the Church become a living stone of praise, worship and love. Without loving , doing good to your neighbours the worship of God is incomplete.

Then coming to the point of Who is the I in the church, Father categorically told that it is Jesus ‘s church-the cornerstone of the Church is Jesus Christ. He has the power, wisdom, glory, strength, blessing , honour-all is in Him.

What is the Gate?

The Gate is a defensive barrier to overpower hate. Jesus overpowered both Death and Hate by his resurrection and handed down these keys to the church.

You and I -are the Living Stones of the Church.

Jesus Christ- is the corner stone of the Church.

Father ended the talk with the example of a 300 feet high tree, supposed to be 4000 years old. The roots are intertwined with each other, giving it the strength to stand tall.

In conclusion he said we have to receive power from each other.

That is the significance of the church.

After the rituals, I walked through some of the other parts of the Italian cemetery of Mansoura and the Commonwealth war Graves commission section.

Today..with the families of Bettuchis, Ostuni.who lived here over a century ago..a Pakistani family-of Isaac Almas will have a very intimate link with the Italian cemetery of Mansoura

OTHER POSTS OF INTEREST

A doctor in Imaging, photographer, writer likes to read and travel. A regular diarist, journaling since 1983 Reading journal : gracereadings.com
View all posts by prashant bhatt →
This entry was posted in life and tagged 500 words a day, Diary, Tripoli, Tripoli Reading Group. Bookmark the permalink.